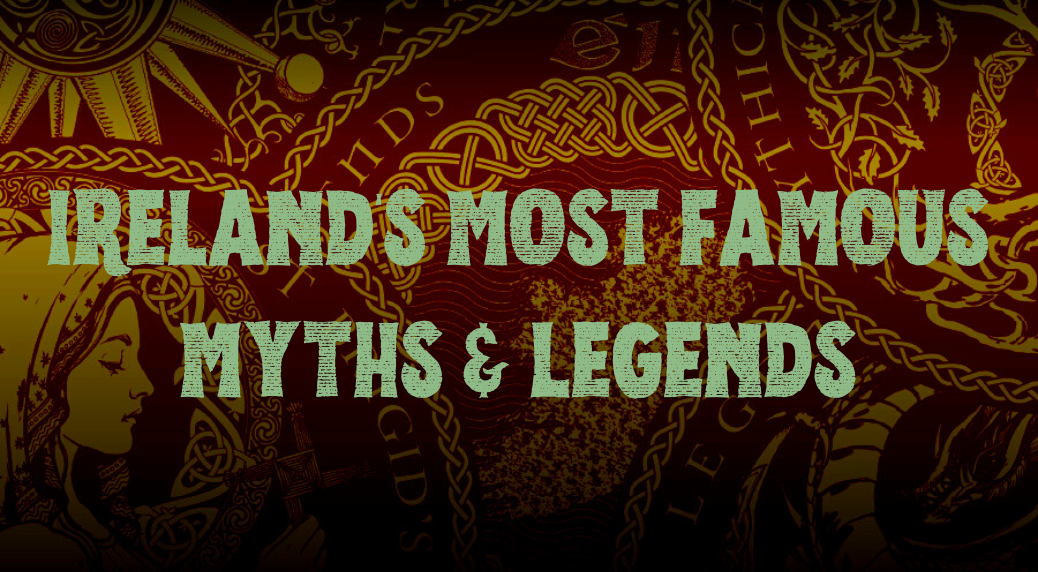 Celebrate Halloween by discovering some of Ireland’s most famous myths and legends!

Since time began, mythology and Celtic legend has been a rich and fascinating part of our nation’s culture, that continues to this day to enthrall all listeners of the tales! This Halloween, take a look at some of Ireland’s greatest legends – and the famous, much-loved ghoulish stories with surprising Irish origins!

The Scream of the Irish Banshee

The legend of the Banshee (Bean-Sidhe), is one deeply rooted in Irish Celtic mythology. This supernatural being is believed to use her mournful shrieking and wailing as an omen to foretell the hearer of an imminent death in their family. Appearing often at night (if she is seen at all!), the Banshee appears in one of three guises: a young and beautiful woman, a stately matron or an old hag, wearing a grey hooded cloak. Traditionally, the Banshee only visited families of pure Irish descent, namely the O’Neill’s, the O’Brien’s, the O’Connor’s, the O’Grady’s and the Kavanaghs. However, more modern retellings of the legend detail her appearing to all families, as marriage diversified Irish family ancestry!

The Dullahan – the Irish Headless Horseman

Another fascinating Celtic legend is that of the Dullahan, or “dark man”. A terrifying death omen, the Dullahan is said to sit atop a jet-black horse with flames shooting from its eyes, and grotesquely carries his own head under one arm as he rides. Legend has it, that when this headless horseman stops riding, someone dies! Some believe that the Dullahan mercilessly douses every person he passes with buckets full of blood, while others say he shrieks the name of the person who is soon to die.

But as with most evil spirits, the Dullahan has one weakness that makes us here at The Dublin Mint Office give a great sigh of relief - the Dullahan is said to despise the sight of gold! So perhaps this Halloween is the perfect opportunity to get some for yourself…

The tradition of carving jack-o’-lanterns has been a Halloween favourite for centuries, but did you know it originated from an old Irish myth about a man nicknamed Stingy Jack?

Stingy Jack was an unsavoury sort of fellow, who had a penchant for mischief and alcohol! It is believed that Jack invited the Devil to have a drink with him, but true to his name, Stingy Jack refused to pay. Instead, he convinced the Devil to transform into a coin so Jack could use it to buy their drinks. But once the Devil did as he was asked, Jack pocketed the money! Also in Jack’s pocket was a silver cross, which stopped the Devil changing back into his usual form, and so there the Devil lived until Jack eventually set him free!

But when Jack died some years later, he found himself barred from both heaven and hell! The devil, however, took pity on Jack, and gifted him an ember of coal to light his turnip lantern as he wandered between worlds for the rest of eternity—inspiring the nickname jack-o’-lantern!

When Irish novelist Bram Stoker published his novel Dracula in 1897, he had no idea that the main character in his book would go on to become a cultural mega icon - recognised the world over purely by name, the inspiration for hundreds of films, books and television adaptations, still now - more than 120 years on!

And many believe that Stoker drew his very own inspiration for the book from his homeland! It is said that Dracula shows a strong resemblance to the Abhartach – a tyrant mentioned in early Irish legend. In Slaghtaverty, Derry, the fiendish supernatural Abhartach once lived, feasting on human blood!

Legend has it, that this Abhartach had lived for centuries terrorising the local villagers, until a neighbouring chieftain named O’Kane was called in to vanquish him. He succeeded and buried him standing upright in the ground. But the next day, the Abhartach returned from the dead more bloodthirsty than ever. O’Kane finally managed to slay the Abhartach once more, burying him this time headfirst in the grave, an action that stripped the Abhartach of his supernatural powers – and free were the villagers, at last, of this ferocious being!

To celebrate our very own Celtic mythology you can claim your FREE Celtic Legends ‘The Tree of Life’ Medal (just €3.95 P&P)!