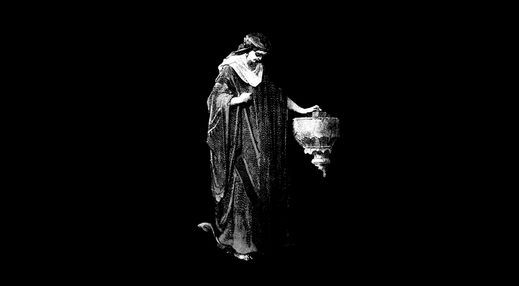 One of the reasons many of us love old coins is that they are a witness to the past. To hold one in your hands is to make a tangible connection to the hands that once held it before yours. Coins have been present at the most pivotal events in human history and have been carried in the pockets and purses of kings and beggars ever since they made their appearance about 2,600 years ago.

It really is an amazing thing to be able to physically own something that is over 2000 years old – to hold a real piece of history directly in your hands. One such coin is the Judean Widow's Mite which you can own for yourself here.

A coin doesn’t have to be struck in silver or gold to be valuable. Indeed, two of the lowest value coins in circulation two thousand years ago provided the inspiration for one of Jesus’ most famous teachings in the New Testament.

The grand temple in Jerusalem was a hive of activity. Crowds of pilgrims passed through the temple gates and paused to throw their offerings into the large ceremonial collection bowls that stood ready to receive them. The high temple walls would have echoed with the noise of coins as they landed in the bowls. Many wealthy people were throwing in large sums of money, much to the delight of the religious leaders.

Amidst the noise and the people, one donation went virtually unnoticed. A poor widow briefly emerged from the crowd to drop in two small copper coins. Compared to the many wealthy donations, her offering was an insignificant amount. Her coins were so light that they would have barely made a sound as they landed in the bowl.

But her gift had been observed by a young man sitting quietly opposite the collection bowls. He had been watching the people as they made their donations, large and small, to the temple treasury. Quickly, Jesus called over his followers and shared an astonishing insight with them.

“Truly, I tell you, this poor widow has put more into the treasury than all the others.  They all gave out of their wealth, but she, out of her poverty, put in everything – all she had to live on.”  Mark 12:43-44 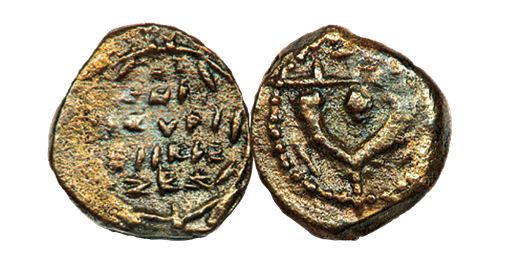 Jesus used these two little coins to explain one of his most radical teachings. God measures the true value of a gift, not by its financial worth but on how much it costs the giver to give it.

This teaching put him at odds with the powerful religious leaders in Jerusalem who enjoyed fine clothes and banquets while demanding offerings that pushed God’s people into poverty.  They hated Jesus for calling them out for their hypocrisy and speaking with the authority of God, and so they conspired to have him put to death.

Of course, we have no way of knowing precisely which coins the poor widow dropped into the collection plate that day. They were most likely tiny copper lepta, or similarly sized prutah. In Jesus’ day, these would have been the lowest value coins in the region. Often poorly struck and badly worn, they would circulate for many decades until they no longer resembled coins.

When the Bible was translated into English, the Greek word lepta (meaning thin and small) became mite, which was the name of the smallest coin circulating in Europe at the time. The word was used by the Bible translators so that readers could understand that it was a coin with the lowest possible numerical value.

The coins could have been struck a century or more before Jesus saw them in the temple. The Maccabee ruler Alexander Jannaeus (103-76 BC) struck huge quantities of prutah and lepta, and archaeological evidence suggests that they continued to circulate well into the second century.  These coins depict an anchor on the obverse and an eight-pointed star on the reverse.

The lepton and prutah were in circulation for so long that surviving examples are almost always extremely worn.  But that is part of their charm. Just imagine the number of people who carried this coin with them, the places they went, the things they saw. Who knows, maybe one of its previous owners was a poor  who dropped it into the collection box in the temple.

It has been said that all of the armies that have ever marched, all the Parliaments that have ever sat and all the monarchs that have ever reigned, put together, have not impacted the world as powerfully as the man who taught us the true value of a gift.

It is truly rare be able the hold an ancient coin that circulated in the Holy Land at the time of Jesus, and so, you can only imagine just how honoured we are to be able to offer you the opportunity to do so. Certified and authenticated by the Numismatic Guaranty Corporation (NGC) and housed in a museum grade acrylic holder to display and preserve it for generations to come, the Judean ’s Mite is available to you now. 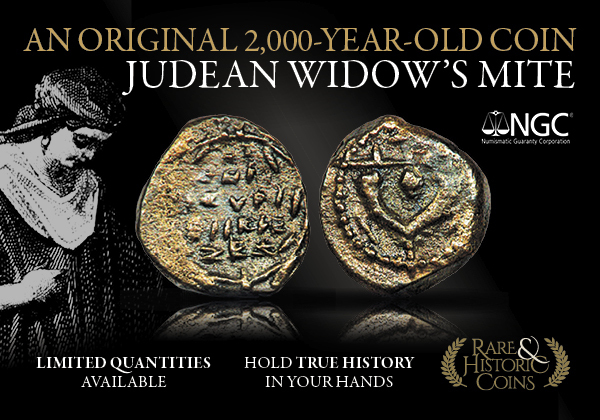