The Legend of “Stingy Jack” 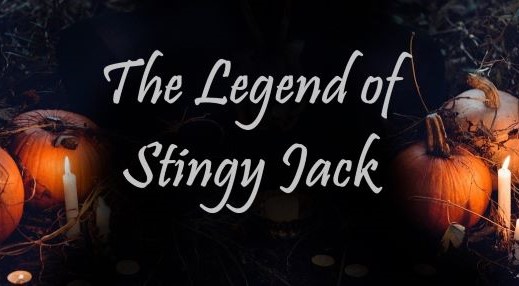 One dark night, miserable silver-tongued Jack, who was full of mischief and trickery, ran into the Devil himself! The Devil told Jack that he had come for his soul, for all his evil deeds he had done over the years. Jack asked the Devil if they could go to the tavern for one last drink before they departed for hell. The Devil agreed, disguised himself as an old man and followed Jack into the tavern.

This gave Jack enough time to formulate a cunning plan to trick the Devil. After their drink, Jack informed the Devil that he had no money to pay, but he had a plan that the Devil would like. He explained that if the Devil transformed himself into a coin, he could use this coin to pay and afterwards he would be able to transform back and walk away. The Devil was impressed by Jacks underhanded plan and agreed, but little did the Devil know that this was Jacks plan all along. As soon as the Devil had transformed into the coin, Jack placed the coin into his pocket along with a silver cross, trapping the Devil.

After some time, Jack agreed to release the Devil, however, the Devil had to agree to not claim Jacks soul for ten years. The Devil, who was embarrassed that a mere human had tricked him, begrudgingly agreed.

Ten years later, Jack once again found himself face to face with the Devil. Jack seemingly agreed that he had had his 10 years and would follow the Devil to hell for his punishment. But suddenly Jack pointed towards a nearby apple and asked the Devil would he allow him one apple to fill his belly for the long journey to hell. Foolishly the Devil agreed and as he began climbing the tree to retrieve the apple, Jack sprang into action, placing silver crosses around the base of the tree, trapping the Devil for a second time.

The enraged Devil demanded his freedom, once again Jack agreed to his release should he comply with his request that his soul never be taken to hell. The embarrassed Devil agreed, and left Jack alone.

After many more mischievous years of trickery and drinking, Jack passed away an old man. However, because of his sinful life he was denied passage through the Gates of Heaven, Jack went on to travel to the Gates of Hell where he once again was denied entry due to the promise the Devil had made.

The tables had turned, and Jack was trapped.

Jack not knowing what to do or where to go asked the Devil “But where can I go?” the Devils response was a simple one “Well back to where you came from of course!”.  The Devil took pity on Jack and gave him a small ember from the fires of hell and placed it in a hollowed-out turnip to light his was in the dark.

Since that fateful day, Jacks lost soul has been doomed to wonder the earth with only his lit turnip to light his way.